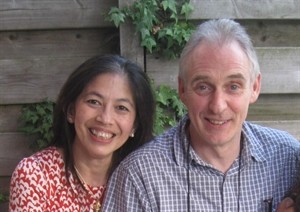 Reflection – a deserving and therapeutic pursuit, reminded the Queen’s Christmas message. Not one usually to pay much attention to Her Majesty’s words. But these did encourage me (not that I need much 😉 to blog on our year once again. Also thanks to those friends whose similar annual recaps are always fondly read…

New Year’s Day 2013 found us somehow at the remembrance garden where I’d scattered my father’s ashes some months earlier. A rather sombre opening to the early dark months of the year. (Don’t despair it’s not all to be this down-beat 😉 During January and February, sadly few diversions from a new work project (EDF Energy, operators of UK nuclear power) having moved on from Heathrow airport after two years. Passage of cold weeks at least brightened by some reunions: Geoff/Elena over from Russia; Seb /Aini, our under-utilised Bali-connection, stayed over a night or two. Attempts to keep body ticking-over with resumption of fairly regular swimming. And the mind occasionally stimulated by University lectures snook in to some mid-week evenings, mostly architecture.

March in similar downbeat vein excepting an excellent gig by Joe & Sekou in Shoreditch. (Album title-track played when this blog page was launched, hopefully?) Mother’s Day treat was a visit to Wigmore Hall for the exquisite Tetzlaff Quartet. 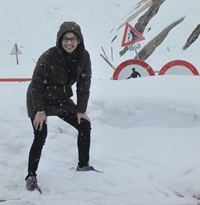 to a snow-blindingly white Black Forest. Worked in a pilgrimage to Messkirch village, Martin Heidegger’s birth-place and site of his grave.

With a gradually milding April more inclination to resume ramblimgs by the Thames and in the Chilterns. A pleasant showing at The Borderline by Fossil Collective.

Out-of-the-blue the worst possible news – Yvonne’s mother passed away after a sudden serious illness and short stay in hospital. Naturally this

necessitated a rushed flight to to East Java for the funeral plus ten days attending to family matters. Sadly for this one I was not really in a position to travel. Instead did what I could to assist logistics for Yvonne, along with some limited long-distance emotional support. Meity (Mami) was a larger-then-life character, a lady of the old school who I was fortunate to have come to know very well over twenty years. A very difficult ten days even for myself just rattling around a solitary flat. So I much appreciated the time of friends (Joe, Gill) who chanced to provide company the odd evening in this period.

For the reminder of May, honed my knowledge of the ThamesRiver Path further reaches to the Barrier and Greenwich. And enjoyed well trodden paths of Chiltern Hills and Windsor. Going in to June a grabbed weekend at Brighton’s blowy seaside, blowing loyalty points on a balconied seaview room at The Metropole. Come month-end a welcome return to the jazz club Dean Street, avoided for some time due to Yvonne’s hearing sensitivity issue. Recollections of a shared pleasure, listening to jazz: The situation of many of our earliest dates, notably the now defunct Jamz bar in Jakarta.

Early in July the 25th anniversary of the significant tragic Piper Apha disaster. Memories of the several colleagues lost there in such youth. Recalled too this event ended my interest in working offshore, following thoughts weighed during my last ever chopper ride the very morning after: Flying directly over the clearly still smouldering, twisted carcass of the platform. Almost coincident the annual ‘old riggers’ reunion with Clive/Karen over from Houston, and Gwyn, Derek now more locally based.

Throughout July sparked by a desire to identify a nearby (driveable) brief Summer holiday destination, took up long pending research in to Yvonne’s Dutch ancestry. Little expecting any 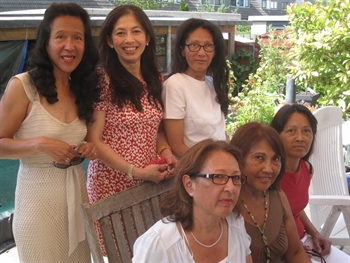 success whatsoever: In a couple of weeks thanks to the wonder of the Web and an amazing stroke of luck (meeting Louk Lapikas c/o the Internet)… were located some seven half-sisters of my mother-in-law! Alive and well living a few hours drive away mostly around Rotterdam. Thus solving the mystery of Yvonne’s grandad’s disappearance from Java soon after World War II. At the same time Yvonne had located the ancestral home of her grandma’s line – a castle no less!

So ensued early August an unusual sometimes emotional journey the (short) length of Holland and touching Germany transported in the still stylish (I think) and trusty Spider: Met most of the new-found aunties, their spouses and children around Southern Holland; spent a night at the restored 11th Century van Boetzelear (family 😉 castle; and mostly, explored the 15th Century homeland of the Gonggrijp (van der Sanden) line based in restful backwater Dokkum, of the far-North Friesland province. (Link to the photo-journey and genealogy page.).

September highlights were two short trips, first to the North of my

roots: In home town Bury a busy couple of days meeting friends Dave/Maggie, taking in a cup-tie at Old Trafford, rambling around the streets, fields and moors of my childhood. A quite startling assault of memories unlocked from recesses of the mind in response to visual triggers of long un-seen homes, streets, buildings and scenes in general. The experience prompted an out-pouring of thoughts captured in a notebook during the speeding train ride back to Euston.

Second, a day later the ever eager Spider was aimed at a farthest extremity of our island for Steve/Natty’s lovely wedding in quintessential Cornish cove Coverack on the Lizard. The long weekend allowed a short if wet walk along the coastal path. And many enjoyable reminiscences with the old student buddies around the hearth and over the breakfast table of our shared cottage lodgings. 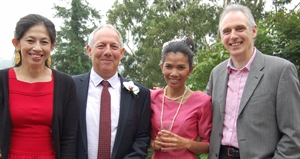 October and November provided no opportunity for away-days. All but two days of Yvonne’s holiday quota now expended due to the unexpected stay in Java earlier. My monotonous weekly pattern continued of Wednesdays over-nights in Gloucester, disruption to my social calendar unwelcome. On the up-side the location afforded occasional beers with friends in the vicinity: Dave, Mark. Still a few diversions though … the local Bloomsbury festival of art, culture, especially music. Took in some favourite local bands’ gigs: Up-and-coming Tree Top Flyers; the uproarous Noisettes; and hip-hoppy Lazy Habits feat. Miss Baby Sol at the 100 Oxford Street Club. Resorting to TV, boxing event of the year the controversial Froch v Groves contest.

As December arrived converted Yvonne’s last two holiday days in to a long weekend at Hotel L’Atlantic, Wimereux (nr. Boulogne). On arrival at the height of a damaging Atlantic-driven storm our balcony over the promenade was initally bracing in the extreme! However following three days saw play out often striking autumnal skies canopying pastel lights in the rock-pools and tides scattered across the stretching beach. Easy to see why this is known 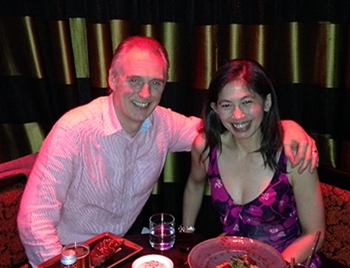 as the Opal Coast. Warmed up in the dry-sauna and steam-room during our daily allocated hours of private use.

The stay in France as much as anything marked Yvonne’s significant birthday. For which she preferred to keep celebrations low-key, rather as I did seven years ago (Bulgaria trip). On the day itself we had a pleasant evening at Buddha Bar. And went on to spend more quality-time during a quiet Christmas at home in a briefly semi-deserted West End. Livened up this festive week or so with brief meet-ups of too infrequently seen friends: Davie/Janey, Clare, Claudia, Steve, Pete, Nick/Ria.

Thanks to you for sticking with this to the bitter end. No twist in the tail of the tale though … just looking forward to hearing from and/or seeing you in 2014. Enjoy fabulous days and nights out there …