To start, excuses for not posting out the festive greetings this time around (for the minority of us keeping the old tradition alive): Wholly swamped with moving home three weeks back, Yvonne flying to Java ten days ago (her birthday) for her brother’s funeral, returning just 72 hours ago. The meanwhile I cleared out the old Charlotte Street Flat and two days ago completed legals on its sale. Oh, and had a busy old month at work – when I could fit it in.

So that is the bad news out of the way, though the Flat sale part not all bad admittedly. Now to flash-back to the start of 2015: Christmas to New Year last Yvonne was visiting family in Java, while I was winding up my
near fourteen years at Capgemini. First January, embarked on my ‘retirement’. Revisiting my diary the next three months are peppered with catching old friends and colleagues, not a few nights out, university lectures, regular swimming, the odd weekend in Bedfordshire, and Brighton.  Abruptly all ended when to my surprise I was offered contract work starting first April.

Contract now on its third extension through to July 2016, though always on two weeks notice either way – so there’s hope yet. Initially the work was largely home-based or in the countryside near Gerrards Cross, 40 minutes drive. Since August though I’ve found myself most days in the heart of the City of London.

Late April we took five days in the trusty (not yet rusty) Spider, now of 14 years vintage, to the sea-side at Zandvoort / Amsterdam for visits to the Dutch aunties. May and June passed with work punctuated only by prolonged negotiation with the developers over their plans for our building. During this period Yvonne’s brother was diagnosed terminal and she went to Java for a fortnight. On her return we tried to chill a couple of days at an Oxfordshire country hotel we know. Eventually, mid-July we reached a quite surprisingly favourable agreement to sell the property. 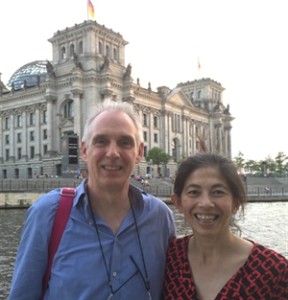 First August, my 59th birthday, we departed St. Pancras Intl on a ten days ‘EuroRail Pass’. Re-living the student back-packing spirit, though with Samsonite luggage and first-class tickets. Reached Prague after nights in Brussels and a Munchen beer garden. Moved on to Berlin after a few days, there to enjoy rather ridiculous temperatures near forty degrees. Still, it was good to hang in the old stompin’ ground for a several days. Broke the return leg with a pleasant evening in Koln.

September and October was all about new home hunting. So, sadly sparse attendances at gigs and lectures despite the new academic year. No options for weekends away. Early November we found a reasonable place in Marylebone and set about renting it for a year. Then ensued several appalling weeks of utter frustration due to total jobsworth estate agents. Winding forward we’re here now. Albeit with neither phone nor Internet ordered four weeks ago and despite four engineer visits – thanks a lot BT!

In conclusion then a distinct lack of exciting or exotic activities to relate for 2015. Despite the promising start, apart from the eventual financial outcome, it has been far from a fun and relaxing year. But at least the dismal scores on these fronts should be easily surpassed by the New Year.